Branch chairman Stephen Moon has provided the following report ahead of the branch AGM on Monday, July 10.

Once again, it is my pleasure to report upon another season for the Annual General Meeting.

I suppose the first word to say is “phew!”  Did any of us have any fingernails left after that final game of last season? At least we came through it successfully to retain our place in the Championship but I’m sure I speak for many when I say I hope we don’t have to ever go through that again.

From the branch point of view, I think this has been a season where we have made some great strides and again, I sincerely thank my committee for their efforts in achieving that.

At last year’s AGM, John Payne kindly stepped in as Branch Secretary, focusing on developing the commercial side of things, started last year and continued this by Simon Bristow.

As a result of their combined efforts, we now have our own up and running website (www.londontrickies.com), a twitter account has also been developed which has really assisted in boosting membership (@londontrickies) whilst we have continued the use the Roxy, in Borough High Street for showing the live TV games on the big screen together with free food for our members which I know went down very well with a number of you. 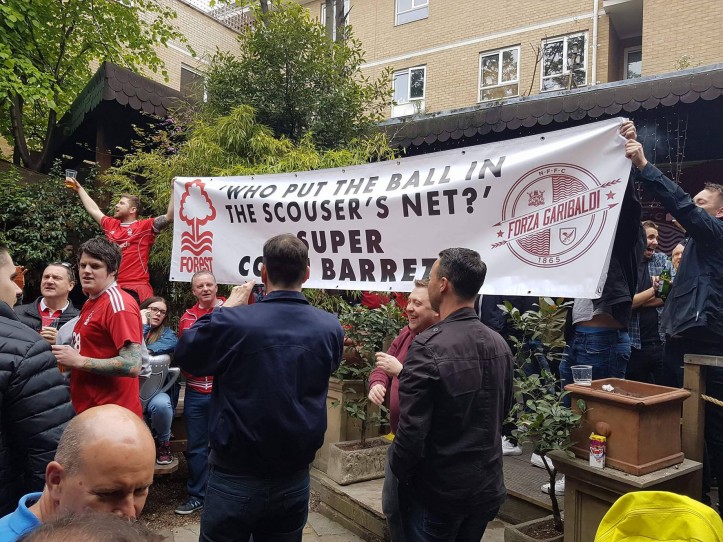 We also are developing another good relationship with another pub, the Horseshoe in Clerkenwell Close, also used by APFSCIL and some of its other member clubs.

In addition, Simon has been in regular contact with the newly formed “Forza Garibaldi” members which has certainly provided a great atmosphere in pre-match meetings especially in London matches.

While this progress speaks for itself, all the other functions in running the branch have to continue smoothly and my thanks are also extended to the other committee members for accomplishing this.

Our relationship with the parent Supporters’ Club remains strong and I need to pass on my gratitude to Joan Bakewell who managed to accommodate our match ticket requirements for the season in just about all cases.

We do now have a number of members who pay for their match tickets electronically but can everyone please remember that, irrespective of the payment method, I still need the stamped addressed envelope to return your tickets to you.  I’m afraid, there’s no electronic way of doing that at the moment.

The branch still actively supports APFSCIL through attending its meetings and also competing in both Darts and Pool Leagues this year.

The Darts team had a tremendous season in both the League and Cup yet again and had success in the individual and pairs competitions.

The Pool team managed to complete its fixtures on time and although only three of the nine matches were won, with a little bit of fortune, quite a few others would have gone our way as well and we have gained a couple of good players towards the back end of the season which will set us up for the cup and for next season.

Over the course of the season, I know a number of you often used the special football travel tickets set up by East Midlands Trains and although developed from discussions with APFSCIL clubs, nevertheless is open to anyone and has been very beneficial.

I believe I did circulate the prices for next season and these fares will hold for the full season and thus not be affected further by the increase that is usually affected every January.

For the first time in a few years, membership numbers exceeded the hundred which I think was a great increase on last season and I understand we have quite a few more going to join in 2017/18. The Twitter account certainly accelerated this but we also gained others from different sources as the season progressed.

As you are aware, this season sees the 40th anniversary of the founding of the Branch and we have arranged to stage a function at the Horseshoe on Saturday, October 7, 2017 as our official commemoration although there could be others as well during the course of the season.

That day is a blank day for football, being an international weekend and we aim to start it around 3pm thus enabling anybody travelling down from Nottingham, the opportunity to come down and get back in a day.

At time of writing this, we are hoping the following will attend : Ben White, Forest Media and Communications Officer, former European Cup winning players John McGovern and John Robertson and Jonny Owen who created the “I Believe in Miracles” film.  There may be others as well.  Tickets and full details will be available by the start of next season.

While this has been a year of development for the branch, unfortunately, there is a downside that we do need to rapidly address.

We have not operated the FA Cup Sweepstake for a few years now, in fairness, I think it had done its time, but what it does mean is that we have no additional fundraising coming Into the Branch.

The influx of new members has also seen an increase in ticket arrangements, especially for London games and this has resulted in a situation where, for the final two London games last season, at Fulham and QPR, our cheque to the football club was returned.

The main reason for this is that, as you know, I need your ticket order three weeks prior to the match and I place our order with Joan during that weekend.

This means paying for the tickets up front.  However, because, as you know, I can never guarantee the tickets, especially on a large order, we do not bank your money for them until I get the tickets which may not be for two weeks after I’ve paid for them by which time Forest have banked our cheque.

In fairness, there were other mitigating circumstances surrounding both those games, but also, if I banked your money earlier and then we found we could not have all the tickets we have requested, it means returning the money to the unsuccessful people.

This is something that I believe we do need to address and it’s likely that at the meeting, a proposal will be made to increase the subscriptions which will bring in some additional income right at the start of the season, maybe more significant with a London game (Brentford) on the second Saturday.

This may sound a bit controversial as the parent club are not increasing their subscriptions this season and this would widen the gap between both parties.

But without addressing this now, I fear what occurred with Fulham and QPR could recur and that would at best be embarrassing for us and at worst, may make our future ordering tickets in the way we do put into question.  I’m sure that once we are back on track with this, we can plough additional monies back into the branch to continue the development we are now going through.

So, I think that sums up everything for the season and I, for one, believe we can look forward to 2017/18 with a wave of optimism especially if we can keep all our existing players and add some more quality and the City Ground may well be a good place to be.  Certainly, the new set up at the club does exude that.

Finally, I think it would be appropriate for us as a Branch to wish one of our members, Barry Bramley, a very happy 80th birthday which he celebrated on Tuesday, June 27.

You may remember that at a match at QPR, almost two years ago now, Barry was taken seriously ill just before half time.  I am pleased to report he has made a great recovery,

I had the pleasure of spending a couple of hours with him last Saturday at a birthday function his family and friends put on for him and he looked very well indeed.  Have a great birthday Barry and may you live on to see many more after it.