Back our Mike on Jeff Stelling’s charity walk

One of our own London Trickies is joining TV legend Jeff Stelling on his charity walk for Prostrate Cancer UK on Wednesday, June 7.

Membership secretary Mike Helme will be walking 26.4 miles for the campaign and has already raised more than £930 on his Justgiving page (yes you should be clicking here)

He will join Jeff on day 6 of the march from Chester FC to Everton FC via Tranmere Rovers FC and Liverpool FC joining an army of marchers who will stride together take on this epic challenge to help stop prostate cancer being a killer.

Mike, who will be wearing the new Forest shirt on his walk, said: “Ignoring prostate cancer won’t beat it, so I joined the fight by signing up to Jeff’s Men United March.

“Normally wearing a Forest shirt around Anfield would be dodgy but this time I should be OK!”

Teaming up with the leading men’s health organisation, the long-standing Soccer Saturday host is aiming to raise £500,000 on his March for Men, 15 walking marathons in 15 days at the start of June, from Exeter City FC to Newcastle United FC. 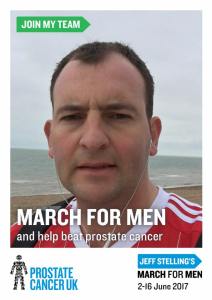 Clocking in at 400 miles, Jeff’s journey will see him visit more than 40 football clubs, heading up the west of England via Bristol and Stoke and through the northern footballing hotbeds of Merseyside and Manchester, before cutting across the country and ending at the home of Championship high flyers Newcastle. Of course, his boyhood club, Hartlepool United will be en route and he will also start the final day at Durham County Cricket Club.

Among those on the walk will be broadcaster Colin Murray (a man with many nice things to say about Forest and Stuart Pearce in particular), Mark Lawrenson, Neil Mellor and Phil Thompson (a man who may well still hold a grudge dating back to 1978).